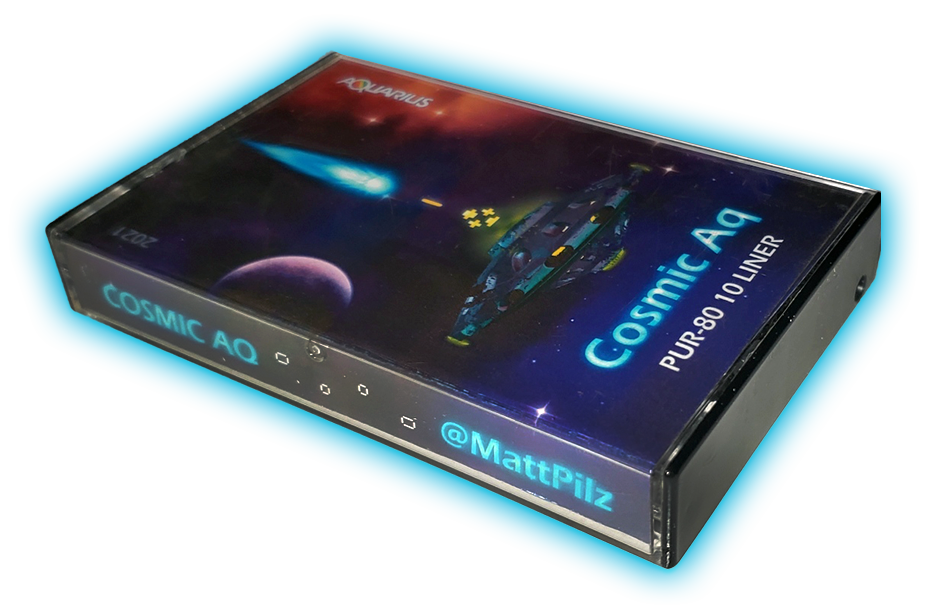 One of my earliest memories in video gaming history was playing Cosmic Ark for the Atari 2600. The sounds and visuals of that game are still etched in my mind all these decades later.

I recently became immersed in the world of Mattel Aquarius, a decidedly underpowered discount home computer system from 1983 that existed for mere months before being phased out. The lack of a dedicated graphics chip or programmable characters make this computer, in many ways, less programmable than the 2600 released six years prior.

Despite its shortcomings, I still find charm in the system. The old adage "limitations foster creativity" rings especially true for this platform. There still exists a small but passionate community of like-minded individuals who are taking the system to new levels with fresh software and hardware modifications.

To pay homage to the classic space shooter of my youth, while also celebrating the 10th anniversary of BASIC 10 Liner and my newfound admiration of Aquarius, I decided to develop the aptly titled Cosmic Aq.

There are some agonizing challenges in working for this platform especially within the scope of a 10 liner. Most notably,  each line can be a maximum of 72 characters and there is no abbreviated syntax for the commands. This gives Aquarius developers a hard limit of 720 characters instead of 800 characters allocated on other platforms in the PUR-80 category.

My original high ambitions for this project quickly diminished when I realized that I was nearing capacity of the code limit just in constructing the visuals for the ship and comet, which initially included a much more elegant design as well as dust trails and explosion effects. I had to refactor the design endlessly to squeeze enough game mechanics in to consider it a completed project. It is comparable to the meteor shower mode of the original Cosmic Ark. 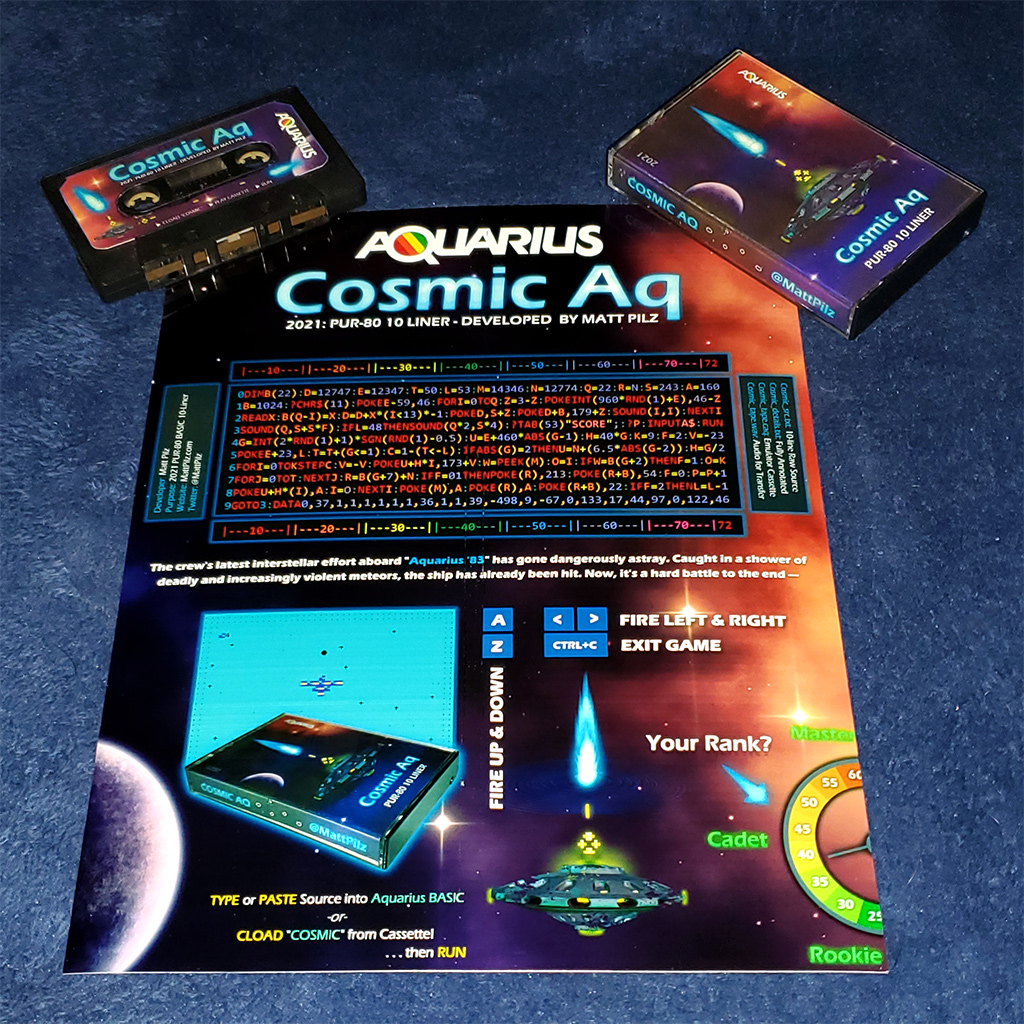 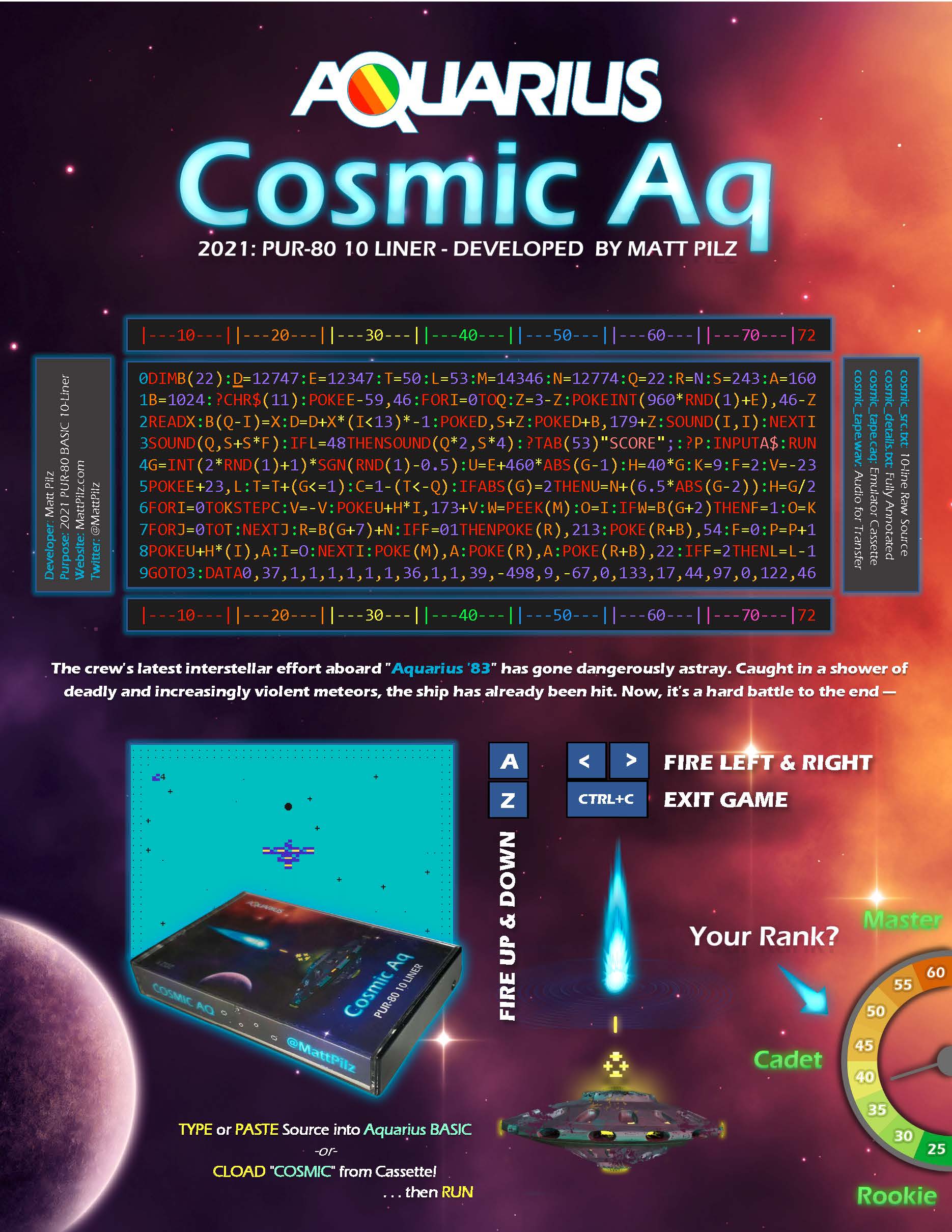 The Mattel Aquarius has a fixed 256 character set and no GPU. It uses early version of Microsoft BASIC—1.7K usable RAM. It also only supports a maximum of 72 characters per line. The screen has a 40x24 grid of tile-like characters-16 colors.

The crew's latest interstellar effort aboard "Aquarius '83"  has gone dangerously astray. Caught in a shower of deadly and  increasingly violent meteors, the ship has already been hit. Now, it's a hard battle to the end; missiles against meteors!

You control the tattered Aquarius spacecraft, hovering in space and with minimal protection against the meteors. By chance, the ship still has functional four-way missles and these can be fired upward, downward, to the left or right. Use this weaponry to obliterate all the incoming meteors!

The game ends when you've been hit more than 5 times. At the end, your score will be shown. Press [ENTER] to start a new game, or [CTRL]+[C] to exit.

These are the essential controls you'll need to succeed:

The game can be played on a real or emulated Aquarius using the factory system base.

The code should work in any Aquarius emulator. The longest standing one is Virtual Aquarius 0.72a. Others include AquaLite and AquaWX from the Mattel Aquarius Computer Group on Facebook. These instructions are for Virtual Aquarius, which is readily available.

(For any emulator, you should be able to simply insert/paste the 10 lines of source code and then type RUN.)

For maximum authenticity, you can run this code on a stock model of the Mattel Aquarius.

Note: This process is sensitive and I only recommend it if you  have previous experience transferring cassette data to  Aquarius. Each sound system and output process will vary.

To experience the thrilling art of 1980s type-in coding books, or if you just feel like an absolute madman, you can manually enter the source code into Aquarius, letter-by-letter.

Below is a basic summary of what each of the 10 lines achieves. To more fully understand each line, refer to line-by-line breakdowns instead.

This section contains extremely technical details of how each line is constructed and the many intricacies required to fit it all in 720 characters of data across 10 lines. Useful for programmers, not so much for general enthusiasts.

LINE 7: Time Delay and Round Win

LINE 8: Cleanup and Round Loss

Sends the program back to line 3 to begin the next round. Contains 23 different data elements used throughout the program. The data is stored in the array in REVERSE-ORDER for some reductions. 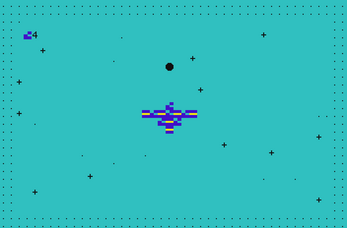 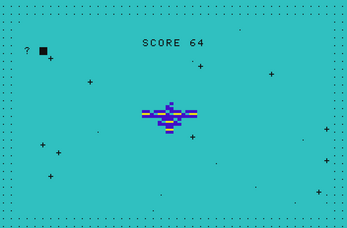