Hedgehogs cannot play volleyball because their spines might pierce the ball.
Instead they choose volleyring - essentially the same game, but using a ring
from Sonic's universe. The rules are simple: send a ring to opponent's side,
don't touch the net or ground. Hedgehog have to jump to strike the ring, but
three consecutive contacts with it is a fault. Match is played to 15 points.

Left player is Sonic the Hedgehog, right player is Shadow the Hedgehog. Both
are controlled by players using joysticks or cursor keys. Press [ 1 ] in the
main menu to choose Sonic's controls, press [ 2 ] to pick Shadow's controls.
Press [ S ] to start match. Note that there is an easter egg in the game!

The game is written in MSX BASIC, and can run even on MSX1. For crazy action
pick MSX Turbo R. If you do not have real hardware, use emulator like WebMSX
(https://webmsx.org/).

General tips:
For single-player action choose the same controls for Sonic and Shadow. Then
you will control both hedgehogs simultaneously. Playing with someone else is
likely more enjoyable, but this mode is good for practice.

Alternatively, one can run game from disk, either automatically or manually:
LOAD "VOLLEY10.BAS",R

Tricks:
As already stated above, Shadow's sprite is mirrored from Sonic. Also, first
ten scanlines of two Sonic's sprites are similar, so there is no 2nd copy.
Ring is generated from its quarter by mirroring horizontally and vertically.
Net is created using STRING$(), as the same pattern for all scanlines.
Many IF statements are replaced by math, since MSX BASIC represents FALSE as
0, and TRUE as -1. An example of this technique is changing ring vector when
it touches screen bounds: R=R*SGN(1+2*(P<1ORP>239)). The result of SGN is -1
for bounds, 1 otherwise.

6 Reset the consecutive contacts counter if needed. Handle Sonic's strike.
7 Handle Shadow's strike.
8 Simulate ring physics. Check for all faults, update score and variables if
needed. Otherwise flip the speed vector, if the ring hits screen bounds.
9 Subroutine that shows score and checks for victory. If so, puts the winner
name and restarts the game.

Thanks to my son Dan for the game idea, ad picture and sprites.
Thanks to SEGA for Sonic and Shadow hedgehog characters.
Thanks to Microsoft and ASCII Corp. for MSX BASIC and machines.
Thanks to Arcade Voleyball authors for some inspiration. 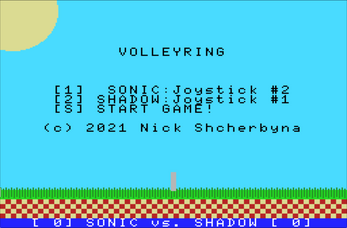 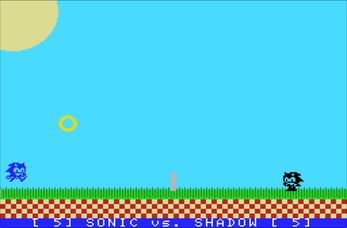