Trick shooting contest! Raise the ball to the right height, drop it on the ramp, and bounce it into the basket. As you make more and more shots, the baskets get smaller appear at more random locations. How many trick shots you can make in a row?

Hold the space bar down until the desired ball height is reached – then let go! Watch as the ball drops onto the ramp and bounces toward the basket. After scoring, tap the space bar to start the next round. Your current score is shown at the top center of the screen while the high score is displayed at the top left. To start a new game, press the space bar.

- Displays both the current score and the high score

How to run the game in the VICE emulator:

1. Launch the x64sc.exe version of the VICE emulator

No lines are greater than 80 characters when entered using standard commodore screen codes and abbreviated commands.

- In ASCII with screen code descriptions

- In ASCII with abbreviated commands and screen code descriptions

C, Char, Screen code of character to print to screen

I, I temp, Temporary loop variable

O, Offset, Offset of the basket from left

The code relies heavily on the subroutine at lines 8 and 9, so I’ll start there (by line #):

8: Draws the specified character (screen code), C, on the screen at the X,Y location. It also blanks (space=32) the last location drawn to (Z,T) so that the ball animation doesn’t leave a trail. A GOSUB to line 8 doesn’t return, but falls through to line 9 before RETURNing.

9: Plays a short tone based on the Y location last drawn to. A character higher on the screen (lower Y) gets a higher pitch so that the ball arch makes a pleasing rising and falling sound with the ball position. Line 9 is also called directly when wanting to play a sound without drawing to the screen (e.g. the scoring and game over sounds)

2: FOR J loops through drawing the two lines of the basket (target), FOR X draws from the offset (O) to the offset plus the length (O+L), last Y is set to harmless location (T=24), draw routine and loop increasing the Y (next line) between the two J loops. Sets X,Y = 0,12, T=24 (harmless last Y) and C=81 and calls the draw routine to draw the ball on the ramp. Waits for the spacebar.

3: Moves the ball up (Y-1) as long as the space bar is held down (PEEK(203)=60). The ABS stops the ball Y value from becoming a negative number and creates a fun bouncing at the top of the screen. The extra space is to drive my friend David crazy. Line three is short but loops back onto itself. Once the space bar is released, the code falls to line 4.

4: The constants for the parabola equation (H.K) are calculated based on the Y value when the space bar was released. The FOR NEXT loop moves the ball back down to the ramp. The parabola equation was derived from: https://www.radfordmathematics.com/functions/quadratic-functions-parabola/vertex...

6. This is the score routine. This line prints a nice message, adds one to the score, changes border to green (13), sets the Y value to something low (2), executes a FOR J loop that calls the sound routine 4 times reducing Y between loops making a nice chirping sound signaling the score, waits for the space bar to be pushed, and then GOTOs 0.

7. This is the game over routine. This line prints the game over message, changes border to red (10), sets the Y value to something high (14), executes a FOR J loop that calls the sound routine 12 times increasing Y between loops making a decreasing low sound signaling the end of the game, waits for the space bar to be pushed, set the score to 0, and then GOTOs 0. 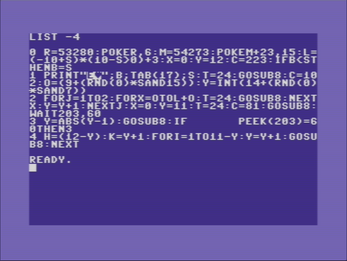 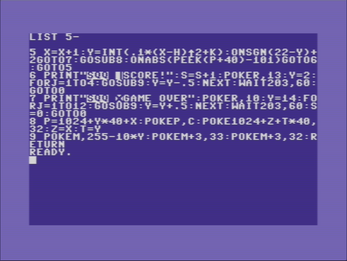