There are 8 pairs of coloured shapes in a 4 x 4 grid, initially unrevealed. You need to reveal them and match the pairs.

Each player reveals 2 coloured shapes. If they match then the player gets another go else the shapes disappear and it's the turn of the other player.

Once all of the pairs of coloured shapes have been matched the winner is the player who has matched the most pairs.

Keys: A to P (as indicated by the grid shown on screen)

The emulator that I used is an online one: JSBeeb - https://bbc.godbolt.org/

The program stucture (referring to the expanded version) is as follows:

l is the probability (out of 10) that the computer "remembers" a shape when it is revealed. So when l is 5, for example, the probability of it remembering a shape is 5/10 or 50%.

i,j,t,g - general purpose variables. The 600 and 900 subroutines (computer and human turns) set i and j to the grid positions of the 1st and 2nd shapes selected.

z - the number of unmatched pairs. This is set to 8 initially. The game ends when this is 0.

u - the colour scheme

x,y - used in the shape drawing routine. The x and y coordinates of the shape being drawn.

when calling subroutine 800 in the initialisation (k=0)

in subroutine 400 when "remembering" a shape and then k is set to 0 to erase the shape (i.e. k=0 when it drops into the shape drawing routine).

later in the shape drawing routine k is set to the number of sides that the shape being drawn has.

it gets reset back to 1 at the end of the shape drawing routine.

The strategy used by the computer player is simple, but effective, it will beat you most of the time (at the highest skill level).

First of all it remembers all revealed shapes (at the highest skill level anyway).

If there any known pairs then select a known pair.

Else reveal an unknown shape, if you know where it's partner is then select it.

Else reveal a 2nd unknown shape (there's still a chance that you'll guess a pair). 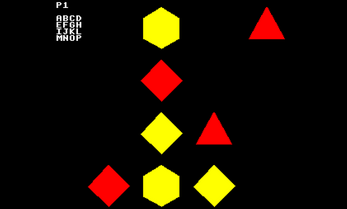