Written by Sander Alsema for the 10-liner competition 2022.

In ancient China, farmers and dragons could peacefully coexist. Of course

there were some minor issues, but usually these could be easily overcome

with a little mutual understanding. This all changed when the farmers let

greed into their hearts, wanting more and more profit with no regard for

other species. Gradually dragons became obstacles rather than allies in the

eyes of the farmers, and had to be eliminated. And so the war began.

You are a female dragon, living in a cave in the vicinity of a small

village. From here fifteen farmers tracked you down and now, armed with

sticks, want to destroy your eggs. The only way to protect your offspring

is by spitting fire balls at the attackers.

PRESS 1-5 TO SPIT, where the number indicates the force with which this is

At first the farmers are somewhat cautious. But whenever you hit one, the

next one will be more daring. If a farmer reaches your eggs, then you lose

the game. But should you manage to kill all fifteen of them, you will win.

Segment of the dragon's neck, pile of eggs and farmer.

Build the complete neck string, read and assemble the segment

strings of the dragon's head and build a vertical orientation

To save space further along in the program, set a variable to

Set character colour to yellow before clearing the screen, so that

a POKEd character on screen is immediately yellow.

Display the number of killed farmers, the pile of eggs, the neck

and the head of the dragon.

Set the farmer's horizontal position variable to the far left.

Line 2: Randomly calculate a new value for the farmer's horizontal

position. As the game progresses, the chance of this value being

Line 3: Set a string variable to hold the victory text.

If the fire mode is clear, then determine the value of the key

pressed. If this value is from 1 to 5, then set the fire mode,

set the horizontal and vertical position variables of the fire ball

to the front of the dragon's mouth and clear the gravity variable.

Line 4: If the fire mode is set and the position directly under the fire

ball is not clear (you hit a farmer), then increase the score. If

the score is less than fifteen, then jump to line 1.

Line 5: If the fire mode is set, then clear the previous fire ball.

Decrease its horizontal position with the value of the key pressed.

Increase its vertical position with the gravity variable. Increase

the gravity variable. As a precaution, clear the fire mode. If the

vertical position is still on screen, then display the fire ball

and reset the fire mode.

Line 6: If the farmer has not reached your eggs and the score is less than

fifteen, then jump to line 2.

This line also contains data for the segment of dragon's neck

string and the pile of eggs string.

Line 7: This line also contains data for the farmer string.

If the score is fifteen, then set the final text string to the

Line 8: Clear the screen, display the number of killed farmers and

"GAME OVER". Also display the victory text, if appropriate.

Line 9: This line also contains data for the segment strings of the

A really fun game, with deep meanings. Thanks for it! 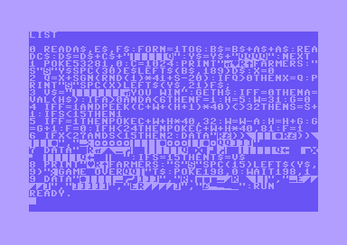 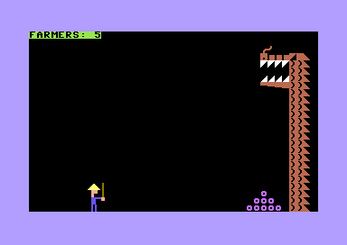