A character-based Mandelbrot-Set explorer in BASIC (in 10 lines or less!!)

Prints a Mandelbrot Set as characters. Since calculating the Mandelbrot is quite intensive for an 8-bit machine, and the ZX Spectrum is a 1980's computer, this takes some time to execute and complete.

5-6-7-8 for moment (7=Up, 5=Left, 6=Down, 8=Right) (not shifted). These are the traditional Sinclair ZX Spectrum cursor keys, and are marked as such on ZX Spectrum keyboards.

Load the file 'Mandelbrot_fast.tzx'. It is set to Auto-run. In the Fuse emulator you can do this with Open File menu item. (You could also type LOAD "" from either 128K or 48K basic once you've 'inserted the tape' (in Fuse via the Media->Tape->Open menu). Other Spectrum emulators work as well, of course :-)

The fast version uses Boriel's ZXBasic compiler: https://zxbasic.readthedocs.io/en/latest/archive/  We suggest you get it from here to get the latest version - although you can install an older version using pip.

The command line we use to compile it to a tape file is:

Load the tap file into an emulator, for example Fuse. The tape should load into a 48K or 128K machine. It should also load into a Spectrum Next - although this hasn't been tested.

You will need to type 'RUN' after loading the program (if you type LOAD "" from BASIC, or go to basic and type run) - it's not set to auto-run the program. Feel free to view the source in Spectrum BASIC. You will see this is the same as the .bas files in the github repo.

This Spectrum BASIC version is slow - the compiled version as expected is quicker.

The spectrum version was converted to a tape with this command:

# Source code and notes between the slow and fast versions

Both the Fast and the Sinclair BASIC versions have the same code except for the first DIM (definitions) on line 10, which defines the variables for the compiler.

The fast version uses fixed point numbers rather than floating point, and due to this the display is very slightly different.

Written by Kenny Osborne and Rob Probin, March 2020. We both live in Scotland, with the largest big city being Glasgow. We are both software engineers who like playing with various technologies outside of our day jobs.

Rob's second computer (after the the ZX81) was the Sinclair ZX Spectrum 48K, which he used for years before moving to 16-bit computers.

* Based on the Wikipedia article here: https://en.wikipedia.org/wiki/Mandelbrot_set, with the idea of using ASCII characters from a stackoverflow post here: https://stackoverflow.com/questions/811074/what-is-the-coolest-thing-you-can-do-...

* Thanks to http://angrydill.com/wasd/ for showing the impossible is possible. Also for the key movement idea.

* To Russell Marks for zmakebas - that saved a LOT of typing in a spectrum emulator! It's on github, but you can also get it here: https://derekbolli.wordpress.com/2012/11/16/create-zx-spectrum-basic-program-tap...

* Last but not least, thanks to BASIC 10 Liner https://basic10liner.com for actually getting us to make something for the old Speccy in BASIC :-)

The contest specifies restrictions for source - but no major tricks have been used. It depends whether you count ASCII version or the Sinclair version how many characters. But the text complies with about 213 characters per line on line 90. The following items have been used to reduce the source slightly:

* One letter variable names.(No conflicts between integer and string to support compiler).

* Movement is an expression not IF string compares.

* Multiple statements on each line.

There are 10 lines in this program, and all of them are less than 256 characters long when in ASCII.

This is even without the tokenisation rule allowed for Sinclair machines here: https://gkanold.wixsite.com/homeputerium/proof

NOTE: The single line if's have been split across lines. This will NOT compile

in ZXBASIC and would require the addtion of ENDIFs - this is just for ease of commenting. Sinclair

BASIC only has statements on a single line after an IF - and ZXBASIC supports this single line version.

The variables are shortened - which doesn't help with meaningful names. Here is a list of variables and their usage:

p  = mandelbrot domain step for x for every coloum on screen

q  = mandelbrot domain step for y for every coloum on screen

a$ = screen characters to be printed based on depth

- When over black cursor invisible

- Should CLS on zoom level change

- Remove redundant peek (if it is redundant) 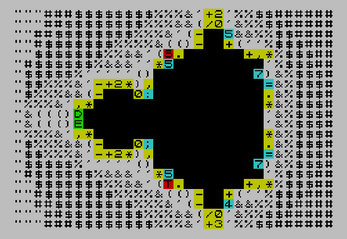 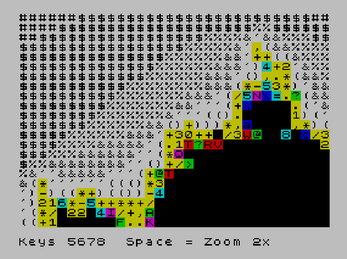