By David A. Gershman - @dagershman

"KaBoom!".  The name variation, "Boomer", is proof this version was

kaboomer.d64    : Commodore d64 disk image for use with emulator.

: Animated .gif of a sample game load and play

thanks to fat fingers on a Mac keyboard.  The char

is inside a string so does not affect game play.

D64 image contains a corrected version of the

Upon executing the program, the user is prompted for the "Time

Limit".  This is the amount of seconds the user wishes to play.  30

seconds is a good value for first-time players.

is hardly any bombs and .9 is a bomb on virtually every line.

Once these values are entered, your "bucket" is put at the top of the

screen and play begins.  Bombs start flowing up to your bucket which

you need to catch.  Time does not start counting down until the screen

on the left and 6 being all the way on the right.

Alternatively, the user may use the joystick in port 2 to move the

while the numbers put the bucket directly in a specific position.

Both methods may be used during game play.

After time is up, the screen clears except for the last line and you

number of bombs displayed.  Finally, you are prompted to play again or

the use of certain terms, such as "{return}" to include carriage

returns in strings.  However, when typing the program in the

emulator, there is no way to insert a carriage return in a string.

variable in the string later.

Display the centered title and prompt the user for the time limit.

Read in the time limit.

strings into pieces on different lines. This is the first part of

Read in the sparsity factor.

The p-array holds the bucket sprite's possible x-positions. I only

'for' loop.  In retrospect, I would need this if I initialize p(1)

Later, I'll manipulate a variable which will be the index for the

array to position the bucket.

Prep for fewer chars later by setting some variables.  'y' is the

register for Joystick Port #2, 'b' is the start of the Spring VICII

addresses, and 'z' *was* used for screen/background colors. However,

I decided to keep both black and thus don't need 'z' either. :(

(Amazing what you find when you make this writeup at 11:30pm.)

Clear the rest of the sprite leaving just the bucket.

Set sprite #0's x-coord to the left most position.

if pushed left or right, respectively.  This sets the j-array

when setting the buckets new x-position.

play again on the same execution.

Set the border/background colors to black.  Since I don't change

either during game play, this is why the 'z' variable is not needed

and I could have just hard coded 0 (or even period).

Initialize 'g' to 0 which will accumulate the number of bombs

"peek(y)" is the current value of the Joystick #2 register.

*clears* the bits when the joystick is moved in a direction.  For

bits for left and right movement.  Thus 'j' is set to 4 if the

the joystick is not touched, the result in 0.

the index variable 'i' is "moved right".  If the joystick is not

Adjusts the index variable, if necessary, to the p-array to ensure

its value stays between 1 and 6.

Check to see if a number was pressed.

If so, then the index variable gets set to that.  Thus, the keyboard

numbers get priority over the joystick, BUT does still allow either

Once the appropriate x-position (index value) is determined, set

Print the left border wall and set color for the bomb.

Compute random position on the line for the bomb.

Space over to where the bomb MAY go.  For now, print a space as if

the bomb WON'T be placed.

factor the user requested, then move back 1 position and print the

bomb.  Else, the bomb is skipped.

Remember, BASICv2 does *not* have an 'else'.  So this portion is

only performed if the bomb was printed.  So this variable, s, will

at the end, we know how many total bombs were displayed.

Finish printing the spaces of the line holding the (possible) bomb.

Compute the remaining time of the game.

Increment player's score if the bucket sprite #0 collided with the

If there's still time in the game, go back and check the

Scroll the game up to clear the screen except the last line.

Display the final score out of the total number of bombs.

Prompt the user if they want to play again.

Get the answer and if 'y', then go play again.  Final

retrospect..."clr" is left over from when I had a dim'd array at the

beginning.  Without 'clr', I'd get a "redim" error when the user

wanted to play again.  I ended up removing the dim'd array but

forgot to remove 'clr'.  This line could have been shorter. :(

reader/user has knowledge of VICE and mounting of .d64 images.

To run the program, the reader/user must mount the provided .d64 file

After mounting the disk, issue the following commands: 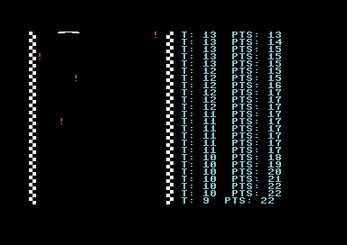 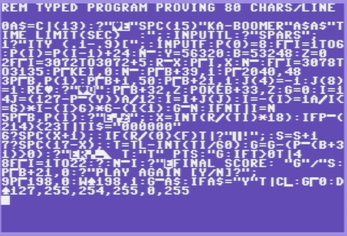