Written by Sander Alsema for the 10-liner competition 2021.

In the distant future, well after the cryptocurrency era, people have

rediscovered the value of physical money. Coins made of a variety of metals

have found a home in the hearts and minds of the general public. Banks are

still the institutes first associated with financial activities of course,

and The First Planetary Bank is no exception.

This is where Marvin is employed. He is only a 17th class android, but he

is ambitious. Besides electronic sheep, he dreams of one day becoming a 1st

class android. You can help him achieve this. Using a special branch, found

in a nearby forest one day, jab the various coins in the correct deposit

boxes, as they fall from the ceiling.

Every time you sort a coin correctly, you class rating increases. Besides

that, Marvin moves up one position, making it harder to sort the next coin.

However, if you make one mistake or if you have reached 1st class status,

then you are finished and get an evaluation.

To use the stick, press:

The main objective of the game is to achieve a 1st class rating, by sorting

the coins correctly. Their value is of no importance to you, since the

money belongs to the bank and not to you. Should you be interested,

however, here is what their worth:

- A bronze coin only has sentimental value.

Line 0: Read data for the following strings: falling down coin, moving to

Make a string with quotation marks.

Build the final android string with both part strings and the

Line 1: In a loop, create the partial background string which also doubles

as a vertical orientation string.

Also in this loop, create the android arm string.

Complete the background string with the coin deposit boxes string.

Complete the arm string with the jabbing stick string.

Set a variable for the android height/class.

Set a variable for the android arm length.

Set a variable for the vertical position of the coin.

Set a variable for the horizontal position of the coin.

Line 3: Display the arm and the falling coin.

Line 4: If the falling coin has reached the altitude of the arm and the

arm is stretched, then animate the coin moving to the right, above

one of the other deposit boxes.

This line also contains data for the falling coin string.

This line also contains data for the following strings: Moving

to the right coin, the colours brown, light grey and yellow and

the top part of the android.

If the key pressed was "S" or "H" and the arm is retracted, then

stretch the arm and set a variable with the horizontal position

of the second deposit box. If the key pressed was "H", then set

this variable with the horizontal position of the third deposit

If the bottom of the screen has not yet been reached, then jump

This line also contains data for the following strings: bottom

Line 8: If the coin has fallen in the correct deposit box, then adjust the

loose change amount and increase the android height/class. If the

android has not yet reached the top of the screen, then jump to 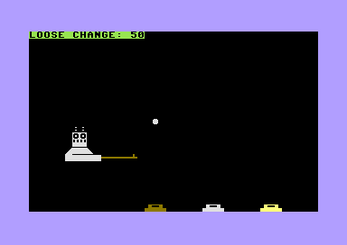 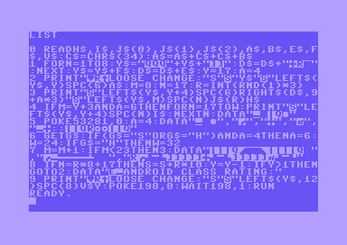